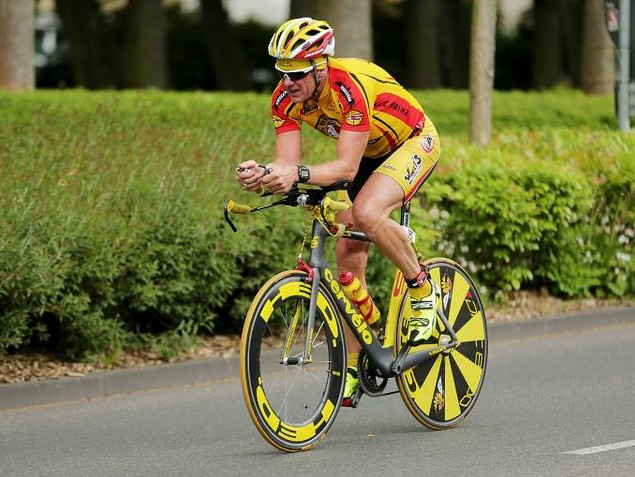 in preview to Powerman Alsdorf in August 2021, we would like to introduce our athletes and get to know them:

Please, introduce yourself and highlight some important moments/successes of your athletic career

My name is Jörg Stehle and I am a 66-year-old German age group triathlete/duathlete. All my life long, sports has been my passion, starting from decathlon to basketball, cycle racing to finally end with triathlon. Being a professional scientist, I have a never ending ambitious curiosity in chronobiology research and I am a student teacher. As a small boy, just having started with track and field, I promised myself as a once in a lifetime wish to become once a world champion. It lasted more than 50 years to - almost - fulfill this dream, and it happened in duathlon! I missed my lifetime goal by only 22 seconds, becoming vice-world champion in the year 2019 in Pontevedra, Spain. Having reached the ‘must’ of a triathlete in 2017, namely the successful participation at the IRONMAN world championship in Kona/Hawaii, I can now, as a former decathlete, concentrate on my ever since obsessive love for all-around sports, namely on duathlon! Having accomplished a five times in the row win as a German duathlon champion, becoming European duathlon champion in 2018 and 2019, I almost reached my boys wish in 2019 in Pontevedra. Almost…. There obviously is still room to improve in my age, provided my joints continue to cooperate.

How did you become a duathlete?
Some 20 years ago, I met during a camping vacation at the Cote d’Argent my ‚sports-sibling‘, the successful duathlete and also former decathlete Kalle Schmitz, who introduced me to the for me unknown discipline of duathlon. Already two years later, in the year 2002, I became with two co-athletes from my cycling club Vorwärts Orient Mainz, German age group team champion in duathlon, age group 40-50. My fascination for duathlon was born! In 2008 I repeated this success, now with a team of the TCEC Mainz. Eventually in 2015, I gained my first individual duathlon national championship title – with 4 more to follow, all won in Alsdorf!

From your personal perspective, what is special about the run-bike-run format of Powerman World Series?
Special for me is the fact that duathlon demands strength in your legs only, but this 3 times in the row! Being a bad swimmer, I happily switch away from cold waters into running and cycling shoes. Compared with the classical format of 10/40/5, the Powerman series is even harder to successfully perform, as distances are much longer. For me, standing 184 cm in height and having almost 80 kg of weight, the 10/60/10 Alsdorf format is almost ideal, as it is a combination of endurance in running with brutal force and strength in cycling.

How often did you compete at Powerman Alsdorf and what is you personal highlight regarding this particular race?
Having competed already 4 times in Aldorf, one knows each other and I am familiar with this great event. The never-ending enthusiasm of Patrick Thevis, the many, many excited and applauding spectators, the top organization, the down-to-earth remaining of the organizers and the moderate starting fees make the Powerman duathlon in Alsdorf for me a yearly highlight competition. Like the years before, this will make me also this year standing at the starting line with a smile in my face! My personal highlight has been, being the ‚coverboy‘ on the 2017 program flyer of the 8th Alsdorf duathlon.

Have you participated in any other Powerman World Series races? If so, what is your „don’t-miss-race“?
I have been once on the starting line in St. Wendel, which was rather a cross event, regarding running….POWERMAN Zofingen is definitely a to-do event for me!

How does a typical training week looks like in your preparation for a Powerman race (apr. 2 month prior to the race)?
My training programs are planned by Mario Schmidt-Wendling from SISU-Training. I do, what he says, as my successes prove him right! As the POWERMAN duathlon in Aldorf will this be shifted into August, I will already be in training preparation for participating again at the IRONMAN world championship in Kona, which means 7 days training per week – Mario will know how to time my performance, so that I will be standing in top form at the starting line at both events.

Despite the current uncertainties of racing in 2021, do you have a competition schedule in mind?

I am also enlisted for the European long-distance championship in Roth. However, in my age, only one event is doable, Roth or Hawaii – the current corona pandemic will guide my decision. And then there is also the duathlon world championship in Almere in early September – if Hawaii is cancelled again, this is the next bet for me!

Last but not least: What are your best advices for athletes who want to participate in a Powerman race?

Running, running, running, in duathlon running is critical for winning, as almost everybody can perform well in cycling nowadays. Transitions have to be trained - from running to cycling is still an easy go, but from the bowed forward position on the TT bike back into the running shoes for another 10k is a challenge! Don’t waste all your strength with cycling during the competition! Who wishes to have fast transition times should have two pairs of running shows prepared in the transition zone!